The tenth of july was a first for a lot of things. Research collaborators of the Acting Like A Robot project Ulrike Quade and Koen Hindriks met again in real life, after a period of online meetings as we have all grown accustomed to. A short and experimental new module for students of the VU called Socially Intelligent Robots Project (SIRP) came to an end, for which we gathered in the Robotics Lab. But perhaps the most exciting premiere of all was what we came to see: a performance of a Pepper robot on the instrumental tunes of the Disney hit song “Let It Go”. I want to use this blog to take you through some topics that arose during this afternoon. The presentation was followed by a discussion, where interesting views on robotness, interaction, social intelligence and successful processes were shared. Let it go turned out to be a more true mantra than any would have suspected when starting this endeavour. 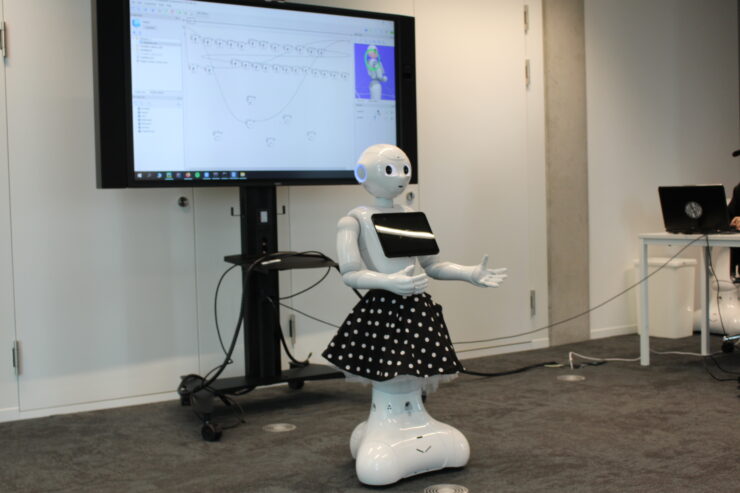 Four students enrolled in the research module SIRP, attracted by the practical hands-on experience that was offered. They were presented with a research question on how the Pepper robot would be able to convey expressions convincingly, taking into account the “robotness” of the Pepper. In other words, how would a Pepper express an emotion, understandable for humans? With only four weeks to go, the students found themselves in a pressure cooker in which they had to decide what expressions to work with, how they could be communicated, how they were going to program the robot and what the presentation would entail.

Drawing inspiration from dance, the group settled on a gradual transition from an expression of shyness, of being timid, and drawn back, to an extraverted happiness, showing the robot as confident and ecstatic. They made an interesting choice for a group with a background in robotics and AI; they looked for an artistic source that expressed that transition for them. This is why they settled on the song “Let It Go”, which musically starts in minor scale and a single melody and develops into bombastic major chords played by a whole orchestra. 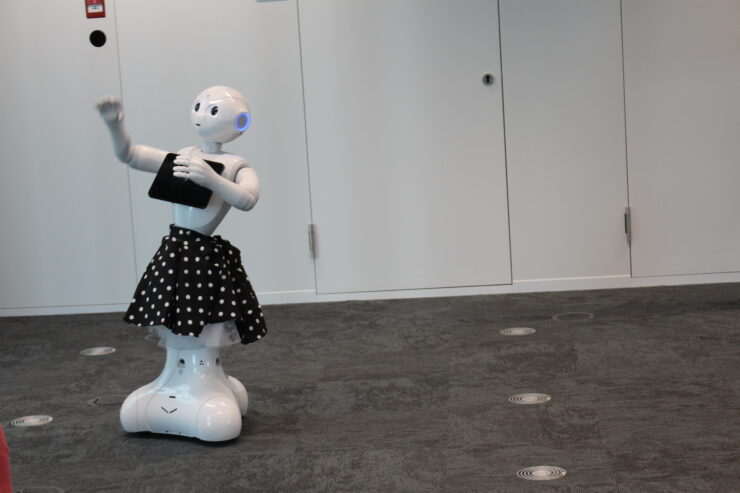 A Will Of Its Own

First things first, the intricate movement sequence was incredibly impressive. In the beginning of the performance, Pepper slowly bowed its head forward, and then towards us. Its seeming apprehension to look at us could easily be recognized as shyness. It portrayed the awareness both of an audience and of itself. And then, the movements got quicker and bolder; arms that went up, a turn of a whole circle, choppy and direct movements of the torso and head. They experimented with the range, speed and timing of the movements, all set on the inciting tune and beat of ‘Let It Go’. And while we were looking at the dance, the students threw each other some let-down expressions. Pepper didn’t follow the plan.

Seeing the presentation unfold from the perspective of a theatre maker made for some recognizable frustrations. The movements did not go in sync with the beat of the music, the robot did not make the full turn where it should have, and for some reason, it would hardly ever even repeat the same mistakes. Four weeks turned out to be quite short in order to really get to know Pepper. And the frustration that ensued was very recognizable for anyone that ever worked with actors or dancers that were forced to repeat the same bit over and over. They get sloppy, they might protest, so for very understandable reasons they become unreliable. The students experienced something similar; it did not do exactly what they planned. A deeper look into what it was that they expected from Pepper showed how at some points they weren’t working with the robot, but through it. For example, the inspiration for the ecstatic expressions were their own grand gestures, a head held high, arms stretched out and maybe even jumps up and down. A quick look at Pepper immediately tells you that those movements are nearly impossible. 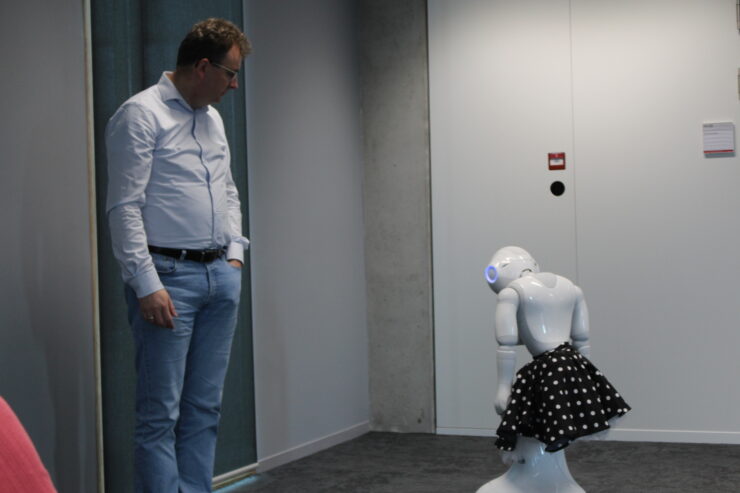 Koen Hindriks and the unreliable performer. Credits to Marijke Hessels

After seeing the movement sequence accompanied by the musical score, we asked:

“Perhaps we could see the movements without the music, and try to name what it is we see.”

Some painful smiles of the students gave away that it was exactly the rythm and the precisely timed movements that they held accountable for portraying the expression of the robot. If not for the build-up of the music, what could take us by the hand through that transition? And can you even call it a dance then? Who knows, but that was of course never the assignment. Moreover, the students protested, you would hear all of the motors roar and buzz, taking you out of the illusion. This raised an interesting question. Is an illusion of smoothness, of human-like movement, necessary to understand what the robot wanted to express? Were there aspects of itself it needed to hide or cover? The challenge might just be to, instead of starting from the human perspective, firstly assess what makes the robot unique; to explore its robotness. As Tim Hammer, puppet theatre maker with the Ulrike Quade Company, stated in an interview on his experience with robots:

“(making it look human) is a pitfall, because it simply isn’t and I will never believe it is a human. It’s useless to pursue that because an audience wouldn’t accept that, they’d see a piece of plastic that is doing something it isn’t really capable of. (…) More interesting is to look at what is unique. He has little motors that produce sound when he moves. I can’t do that, so that’s a unique quality.”

Letting go of our perception of expressions is a clear take-away from this experiment; when our own range of motion leads the example and some slow robot arms are to imitate those, the technology becomes a frustrating and incapable tool. When the robot is the inspiration or even collaborator, it might surprise us how much we can understand of what it tries to express. And of course, the students used a very specific ability of the robot in their dance to underline that: it was marvellous at doing ‘the robot’.