Dead or Alive: Puppets in Motion

Hammer gave a work-in-progress presentation of the upcoming performance De Berg van de Angst (The Mountain of Fear), together with his co-performers Suze van Miltenburg and Ruben Mardulier and their guitarist Roel Goedhart. De Berg van de Angst is a co-production of KASKO and De Nieuwe Oost.

The objective of the afternoon was both to try out some material in front of a small audience, and to offer some insight into the process of making puppet theatre

It was a beautiful summer day on which the sun spared no expense to show itself. Lucky for us, we started the presentation off outside, on a large parking lot adjacent to the theatre building. The guests were asked to spread around the space after receiving a pair of headphones. After basking in the sun for a while, we suddenly heard the soothing tones of classical guitar music and Hammer started his presentation.

Hammer shortly explained the practicalities of making this theatre performance; he described that they had six weeks of rehearsals in total and were now at about one third of the process. He went on to describe how he had been inspired for this performance by his travels to Japan. There, he encountered a form of traditional Japanese puppetry in which the puppet is handled by three different performers at the same time. The puppet is treated by the performers with respect and dignity, as if it is understood to be in possession of a soul. Hammer himself is fascinated by the animation of lifeless objects, which according to him is central to puppet theatre in general and becomes especially visible in this form. 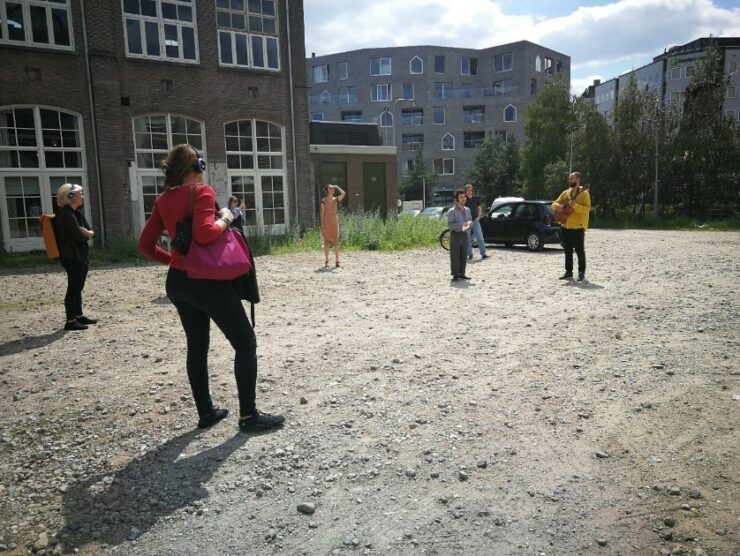 The inspiration for this performance emerged during Hammer’s travel to the actual Mountain of Fear in Japan. Graced with little more than a bridge, a lake and a well, this sacred mountaintop inspires many travelers each year to turn inward. Hammer came to realize that this place and its rituals were more about grief than about fear; a pilgrimage site for everyone who has lost someone or is afraid of dying themselves. A place in between life and death. In the performance, the mountain is represented as such.

After this brief introduction, we were invited to enter the theatre. There, we were shown two separate sequences of movement in which the three performers moved a life-sized wooden puppet across the stage, accompanied by live guitar music.

We were told upfront that the two sequences differed by their underlying premise about the puppet; in the first sequence the puppet was treated as a lifeless object, in the second sequence the performers would treat the puppet as if it was a living body

After the demonstration, Hammer led a short after-talk with audience and performers, which mainly centered around the question of how the spectators experienced these different approaches.

The first sequence created the impression of the broad exploration of an object: in how many ways can the three performers move this puppet through space together? How can they explore its anatomy? Multiple audience members commented afterwards that during this sequence they were focused on the technique of puppetry and the mechanics of the puppet. The second sequence seemed to be more about the puppet itself: it was characterized by a slow discovery and growing awareness of its own body, the guitar music and of the beams of sunlight that fell through the roof windows. At some point the puppet even stretched out its hand towards an audience member on the front row: yours truly.

During the after-talk, it became clear that the difference between a ‘dead’ and a ‘living’ puppet is not always easy to determine

During the first sequence, the puppet’s head was dangling down for most of the time, which indicated a lack of ‘life’. At some points however, the head would rise slowly and suddenly the puppet seemed animated and ‘present’. Similarly, during the second sequence the puppet would explore its own body with its hands, and suddenly bend over so far that it instantly looked depleted of all life and energy. One audience member mentioned that for him the puppet came alive in the slowness in both sequences, mainly because the slow, deliberate movements of the performers made every small motion seem meaningful. Someone else mentioned how sound also plays a big part in how ‘alive’ the puppet was perceived. The breath of the performers was very audible and seemed almost synchronized, and it was easy to imagine that you could hear the puppet breathing. However, when the creaking sounds of the puppet’s wooden limbs sounded through the auditorium, we were again confronted by the fact that it was ‘only’ a puppet. 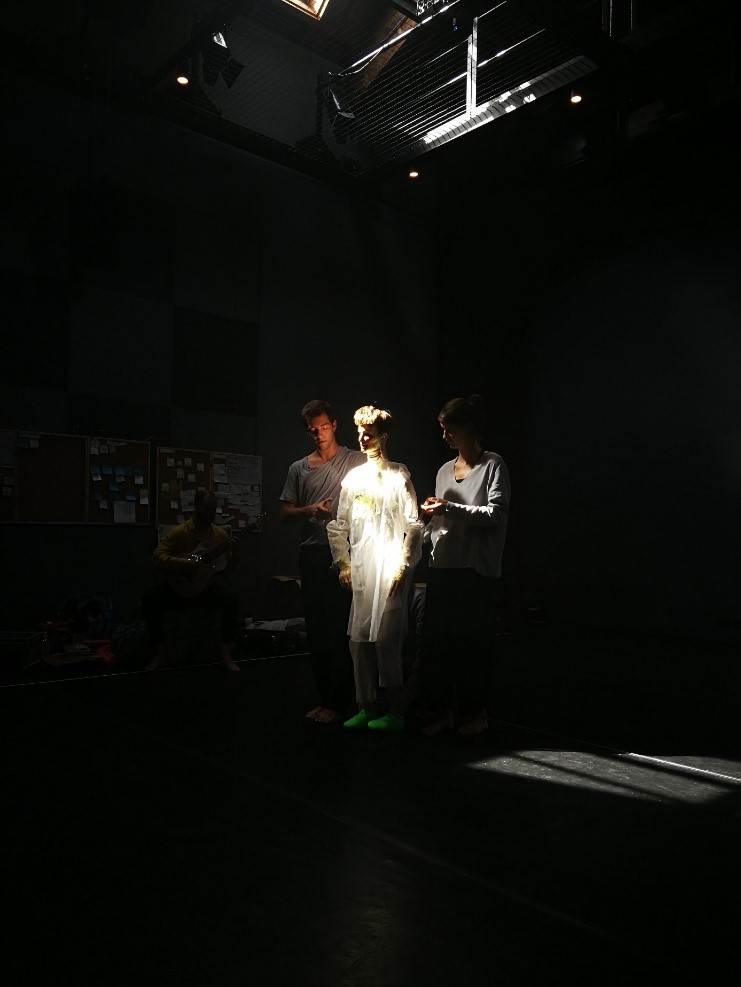 Hammer also briefly addressed the people with a robotic background, asking them if they saw similarities with their own practice. According to one guest, there are some similarities with the demonstrations and interim assessments in the creation processes in robotics and software engineering. The guest concluded that although the work methods in theatre and in robotics might be different, the respective processes might consist of similar phases.

Hammer and his colleagues offered us an interesting insight into their working process. The afternoon demonstrated how different approaches to a puppet can result in different approaches to ‘performing’ with it. Furthermore, we were shown that the difference between a ‘dead’ and a ‘living’ puppet is a fine line. Perhaps this insight might be of interest to the programmers and builders of robots, since puppeteers and roboticists seem to share a similar endeavor.

De Berg van de Angst premieres this autumn. You can purchase tickets via