The Vulnerability of The Mad King 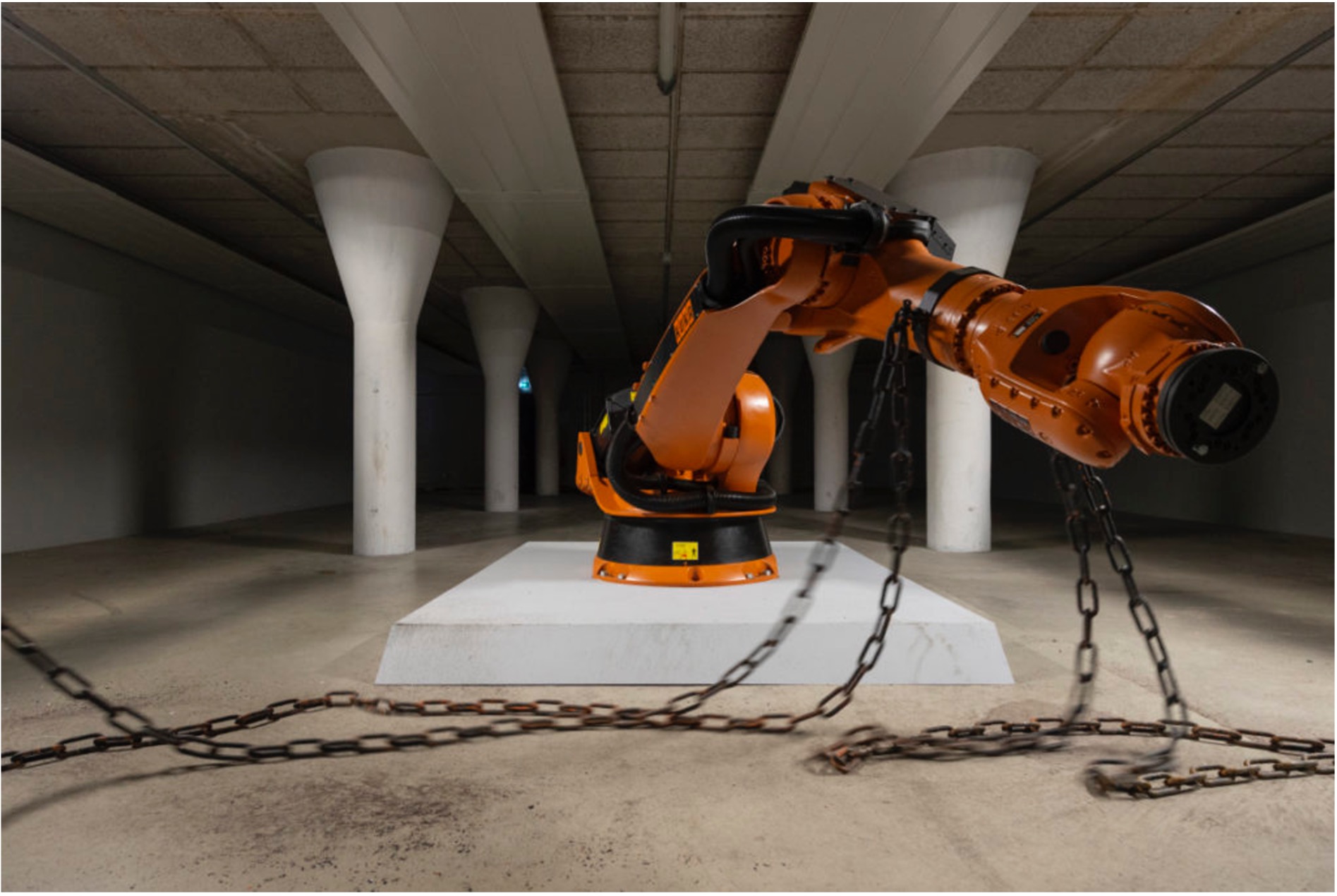 From a distance you hear a rattling sound, as if chains are dragged along a concrete floor. The sound bounces off the walls of what seems to be a large, empty hall. It creates loud echoes, which are accompanied by the sound of what could, possibly, be a mechanic drill. You move closer, and, after walking through the wide-open doors, you find a large, orange robot behind bars.

Factually, it is a robotic arm used in automobile factories to assemble cars. However, in the way it moves in front of the fence, dragging its chains across the concrete to which it is firmly bolted, the robot seems more like a living creature. Its movements are slow, scanning, yet have an air of frustration. Is the robot looking for something? Looking at you?

Suddenly, the robot moves towards the fence with an unexpected, jerky movement. Chains rattle so loud you bring your hands to your ears to muffle the sound, but as sudden as it began it stops. The robot backs off slowly. In defeat? Low, just slightly above the ground, it retreats to its central position. A sadness fills the room. Should this robot be locked up? Like this? Alone? And are those chains really necessary?

Then you regroup yourself: this is a robot we are talking about, a machine, it has no feelings or agency of its own. However, when you walk away and the rattling starts again, lonely and desolate, you cannot help but wonder why it felt so wrong to see a robot locked in a cage.

Arguably one of the most impressive robots in Robots in Captivity exhibition is Bram Ellens’ The Mad King, a gigantic robotic arm chained to a concrete floor and kept behind bars. The Mad King was originally designed to lift chassis in a car factory, but operates now according to the new software Ellens and his team have created for it. The Mad King’s movements are programmed to resemble those of caged animals, such as elephants and lions. These new movement pattern, in combination with its surroundings, creates the image of a constrained wild animal crudely locked in a cage (Steinberg 2021). When he violently lashes out, with its chains loudly rattling over the floor, ‘it is downright scary’ (Dijksterhuis 2020) and the idea of the robot breaking lose seems al to real (Steinberg 2021). Yet at the same time, ‘you pity the robot’ (Quaegebeur 2021). Especially the seemingly natural movements of The Mad King makes the robot into a living creature, appealing to an inner need to unleash it and set it free (Van Ravenzwaay 2020). In one well-put reaction, the central concern of this blogpost comes to the fore: ‘It is peculiar, how something we normally consider to be ‘just’ an object can evoke a feeling of compassion’ (Quaegebeur 2021). So, what makes it possible for visitors to feel this empathy for, and maybe even kinship with, The Mad King?

One important part of the answer seems to lie in the theatrical reality the Robots in Captivity exhibition provides. As soon as you enter the exhibition, it invites or maybe even forces you to perceive the robots as subjects rather than objects. In contexts where robots conventionally operate, such as in factories, as toys or in healthcare institutions, robots are a means to an end: assembling cars, serving as playthings for children, or as work relief for healthcare professionals. However, when presented in an artistic context of the Robots in Captivity exhibition, visitors need to suspend their disbelief about robots, and, in doing so, are able to see them as entities in their own rights. In case of physical appearance of The Mad King’s suggests that it is an ‘object’: the robotic arm has no clear human-like, or even animal-like, physical features. However, through its changed programming determining its movements and its chained position behind bars, The Mad King’s ‘subjecthood’ is explicitly suggested and the visitor is exposed to the possibility of understanding and relating to robots differently.

The Mad King is clearly able to ‘affect’ (Eckersall, Grehan, and Sheer 2017, 115) its onlooker, as is put forward in many of the reactions by visitors: despite its size and almost overwhelming strength, The Mad King also emits a strange sort of vulnerability (Dijksterhuis 2020, Steinberg 2021, Quaegebeur 2021). Here, the act looking at the robot seems becomes a process of double exposure; when looking at another person, we project a sense of self upon them, but this process is distorted when the other looks back. In this reciprocated act of looking, the onlooker is exposed to the other, creating an awareness of our own vulnerability. “Such an awareness (…) might prompt a moment of thoughtfulness and reconsideration about the ways we commonly regard exceptional bodies” (Sturm 2014, 55), or in this case: robots. As soon as The Mad King starts to move closer to the bars of its cage, the visitor is confronted with its ‘subjecthood’. The robot seems to make contact, and in this reciprocated act of looking, a sense of insecurity, shame, and self-consciousness can be felt, alongside a sense of fear for the sheer power of The Mad King. Bolted to the concrete floor and chained to the walls of its cage, the visitor cannot help but feel sorry for it. Sensing this vulnerability might cause the visitor of the Robots in Captivity exhibition to reconsider the way they understand and relate to robots. It is this sense of vulnerability which allows the visitor to open “space for the differentiation of vision” (Sturm 2014, 56).

Outside of the Robots in Captivity exhibition, rapid technological developments hold a promise of progress, yet it remains unclear who is really in control over the technology we increasingly become more dependent on. Moreover, our dependence on algorithms and robots is an invisible one, seeing as many of these operate in the background or in factories oversees. By bringing the technology closer in the exhibition, both literally and figuratively, the ethical dilemmas immediately become more visible and tangible. Visible because the robots take centre stage instead of a supporting role, and tangible because the robots are in close, physical proximity, appealing to the visitor through a sense of vulnerability, making it possible to feel empathy for and maybe even kinship with robots such as The Mad King.

This blogpost is a summary of a larger paper. If you are interested, feel free to contact Floor Mijland at f.w.mijland@students.uu.nl  for the full version.

Floor Mijland is in her second year of the research master Media, Art and Performance Studies at Utrecht University. She has a background in visual art, theatre studies and education. Her interest in robots was sparked during a meeting with Bram Ellens and Maaike Bleeker, and their plans for the Robots in Captivity exhibition and Acting Like A Robot research project.