On 9 September 2021, we witnessed the making process of robot specimens. Created by a collaborating artist of Acting Like a Robot, Bram Ellens, they are on display at his exhibition Robots in Captivity at Buitenplaats Doornburgh since late September. 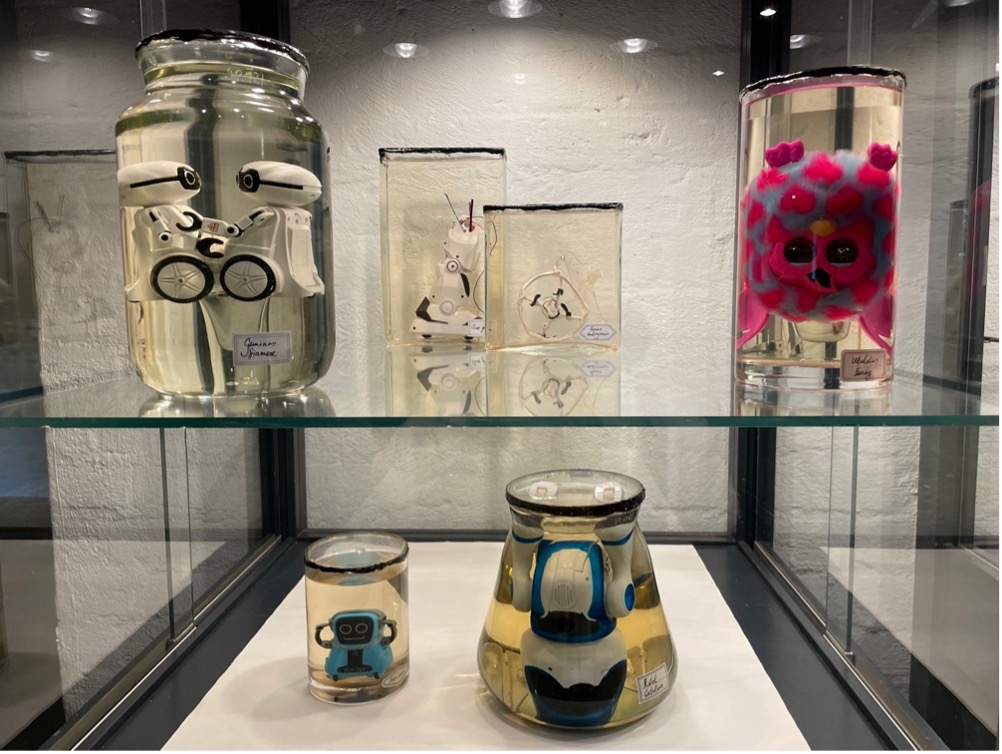 Members of Performing Robots contributed to the development of this work by organizing a workshop (Buitenplaats Doorburgh, 16 September 2021) on the topic of anatomy theatre including different anatomical practices in Western history and the ideas embedded in them. 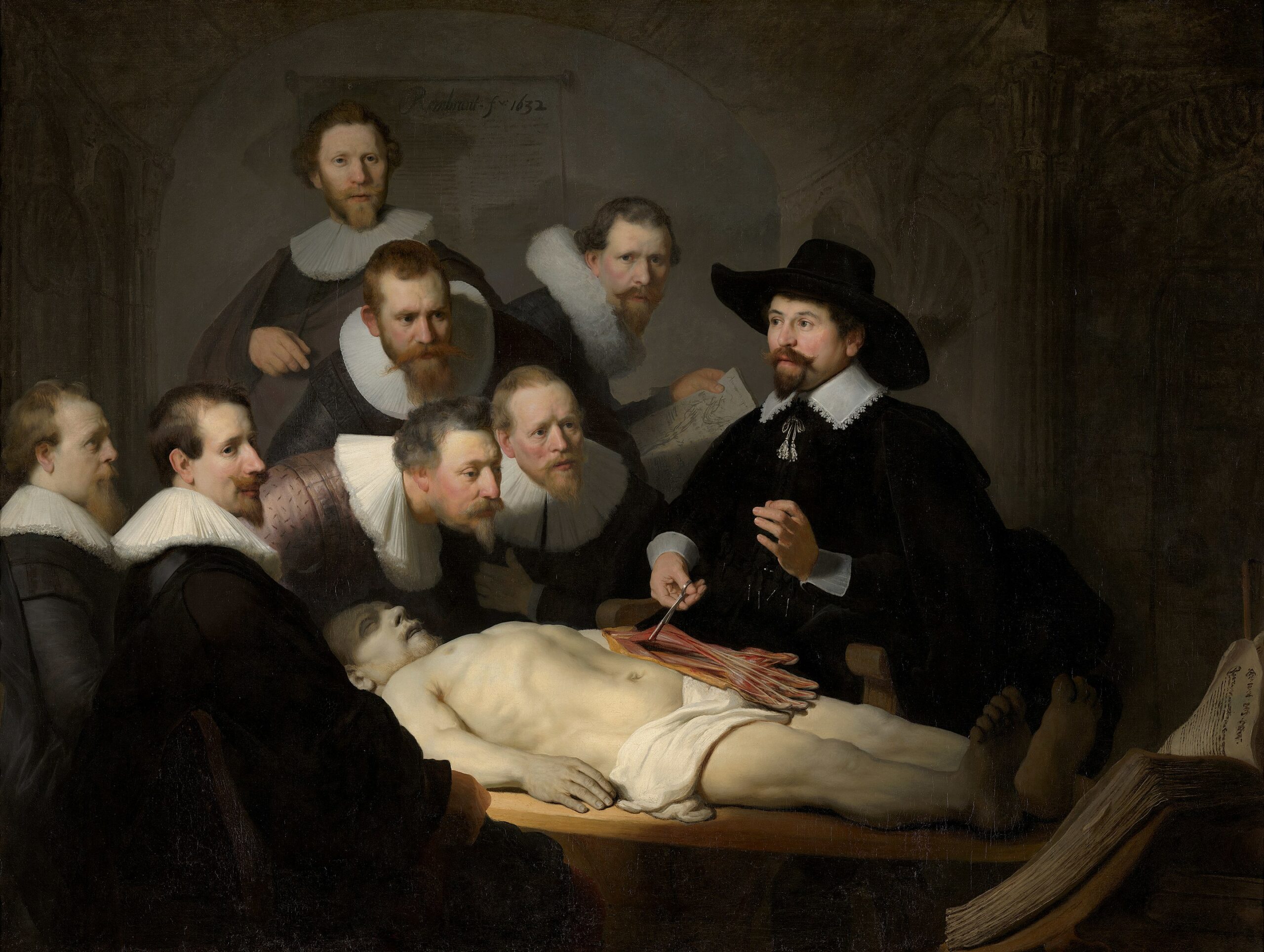 In this workshop, we took Anatomy Live: Performance and the Operating Theatre by Maaike Bleeker (2008) as the starting point for our discussions to advance our insights on the relation between anatomy and performance. We started the workshop by looking at a photo of a painting by Rembrandt van Rijn, The Anatomy Lesson of Dr Nicholas Tulp (1662). As you can see, Dr. Nicholas Tulp is dissecting a human body is which laid on a table, explaining to his students (or spectators, in a way) the anatomy of human arm and hand. Clearly, there is a certain hierarchy, an unequal dynamic between the bodies presented depicted in the painting. Maaike Bleeker (2008) analyzes:

[a]nalogous to speech acts, these constative acts of producing the body ‘as it is’ can be analyzed in terms of three different positions, or persons, involved. The first person speaking is the anatomist, demonstrating the body to an audience. The audience takes the position of the second person, the one addressed. The body demonstrated to this audience is the third person, the one who is talked about, but not speaking him- or herself. This third person is dead, a mute object there to prove the authority of the anatomist (15).

In the 17th century when this painting was created, it was not uncommon to dissect cadavers in theatre-like lecture halls. Here the body, “a mute object” as Bleeker describes (15), is laid out by the anatomist who demonstrates his authority to his students (or the audience) through the act of dissecting and explaining. Interestingly, Bleeker notes that the development of this practice is in line with the era itself, where European countries began expanding their influence across the globe through their seafaring explorations. She quotes The Body Emblazoned by Johnathan Sawday (1995):

[t]o the natural philosophers of the earlier seventeenth century, it was not a mechanistic structure that they first encountered as they embarked upon the project of unraveling the body’s recesses. Rather, they found themselves wandering within a geographical entity. The body was territory, an (yet) undiscovered country, a location which demanded from its explorers skills which seemed analogous to those displayed by the heroic voyagers across the terrestrial globe …  In their voyages, they expressed the intersection of the body and the world at every point, claiming for the body an affinity with the complex design of the universe. This congruence equated scientific endeavour with the triumphant discoveries of the explorers, cartographers, navigators and early colonialists. (Sawday 1995, 23-24).

What becomes clear from these observations is that from the very beginning of anatomy, the Western line of thinking has treated the human body as an object or territory, something dead and still that is there for the living bodies to dissect and observe. As a result, our understanding of the body was (and to an extent still is) based on the dead body, driving us further apart from the idea of the body as a crucial part of our living selves. Such development is also in parallel with the ideas of René Descartes who also lived in the 17th century and thought the mind to be entirely separated from the physical body. Bleeker notes, “[d]issection turns the body into a mute corporeal object, separated from and opposed to the Cartesian disembodied I/eye as the site of subjectivity, thought and knowledge.” In other words, the I/eye, positions the body as something that is to be seen, displayed, and investigated.

The dissected body was not always displayed in serious or educational settings. Bleeker explains, “[i]t was not uncommon for a banquet, a concert, or other performances to adorn dissections, contributing to an event that lasted up to several days” (39). The body was displayed, and dissection was performed with the purpose of entertaining the audience. She further describes, “Tickets for anatomical festivals did not come cheap and were much in demand; we know from historical tracts that rituals and ceremonies added lustre to anatomical lessons” (39).

The enthusiasm around displayed bodies is reflected in the practice of human specimens in the same era, which Ellens has recreated with robot bodies. The practice of preserving humans in transparent jars is largely accepted to have been practiced by Frederik Ruysch (1638-1731) for the first time. Born in The Hague, Netherlands, he was a professor in anatomy and botany at Athemaeum Illustre, now known as University of Amsterdam (Boer, Radziun and Oostra 2017, 16). During his sixty years of time as the chief anatomist of the Amsterdam surgeons’ guild, he developed new embalming and preservation techniques for cadavers which contributed greatly to the development of anatomical studies (Hansen 1996, 663). He exhibited his collection and made it open to the public, before selling over 2,000 specimens to Czar Peter the Great in 1717 (Boer, Radziun and Oostra 2017, 17). Although Ruysch initially developed the specimens for science, he inspired other anatomists to create collections of their own for the purpose of entertainment (18).

Interestingly, displaying the body for leisurely or for-profit purposes is not a thing of the past but an ongoing phenomenon. Perhaps the most well-known example would be Gunther von Hagens’ traveling exposition, Body Worlds, where human bodies are plastinated – a preservation method developed by von Hagens himself – and displayed in different positions ‘as if they were living bodies’ for the audience to see. To make this possible entails not only the plastination of the body in certain positions, but also painting the muscles with red dye to replace the color that blood once gave and inserting fake eyeballs to where the living eyes used to be. As in 17th century anatomy theatre and Ruysch’s specimens, bodies are once again objectified and displayed. Bleeker critiques, “these plastinated bodies serve as proof of the knowledge and understanding handed down to us by historical tradition, a tradition in which the dead body that is used to teach us about living ones” (17).

It becomes clear that there are two common aspects to the practices of anatomy theatre, human specimens, and von Hagens’ exposition. First, as Bleeker pointed out, there is a tradition of using the dead body to explain and understand living ones (17). This is problematic not only because it highlights the parts of body that remain after we seize living and disregard the functions of the body that only occurs while it is still active and alive, but also because it strengthens the Cartesian frame of viewing the body as objectified other.

Second, these practices ultimately stray away from their original educational function into a form of entertainment. The body becomes an object of curiosity for a larger population than students and researchers of biology or medicine, and is displayed for the profit of whoever claims the ownership of the dead body. Although these unsettling practices raise a series of ethical questions, we seem to be curiously attracted to them, allowing them to continue for centuries.

Ellens’ robot specimens consist of various robotic toys or their parts in a jar filled with slightly yellow, but mostly transparent, liquid. He aimed to recreate human specimens of the Baroque era as much as possible. They are sometimes hanging by a thread or sitting on glass platforms to look as if` they are floating, with a label that indicates their species in Latin – just like many human specimens that were made in the 17th century. These specimens sit in antique cabinets at Buitenplaats Doornburgh, in the hallway that leads the visitor to “The Mad King” – a large KUKA robot tied in chains, clinking and clanking painfully loud in such a way that one hears him throughout the entire exhibition. At the very peak of that noise, the specimens – once adorable toy robots ­– sit in silence, staring quietly through space. Their presence is uncanny yet dramatic and amusing.

First, their uncomfortable resemblance to human specimens leads you to questions of our relationship to that of human bodies – how we claim ownership of dead bodies, use them for the benefit (and even profit) of the living, while treating them of object of curiosity and entertainment. From there arises the question regarding robot bodies. At first glance, the questions are ethical ones, as easily asked with that of humans. We stare at them in awe or with curiosity. We use them for our own purposes. We make them work at factories or display them in the names of art and science. Perhaps that is justified as they are but robots. Or perhaps not.

Before one could find answers, the audience stumbles upon another set of difficult questions. How does our relationship with robot bodies affect us as humans? We create robot bodies based on those of our own or of other creatures, but the development of their bodies affect how we make use of ours. For example, development of automized robot arms have released many (though certainly not all) humans from the gestures of repeated manual labor. Perhaps, if one could imagine the development of artificial intelligence and data science as equivalent to humans’ brain development, robots can be seen as influencing our behavior in general. Now the questions are not of robots or bodies but technology in general. Through the empty stares of robot specimens, the audience is faced with a long train of complicated questions. All the while The Mad King numbs your ears with defiance toward his chains.

For two reasons, Ellens’ robot specimens are a successful addition to his exhibition, Robots in Captivity. First, they create a theatrical effect through their silence and stillness amid the rumbling noises made by other robots in the venue. Moreover, they clearly trigger some interesting yet difficult question regarding our relation to and relationship with technology, which is the main theme of this exhibition. Though Ellens does not provide any answers through these specimens (and nor does he aim to), they provide a moment of uncanniness that afford the possibility for us to contemplate on the interconnected matter regarding the bodies of both humans and robots as well as the larger context of technologized society.