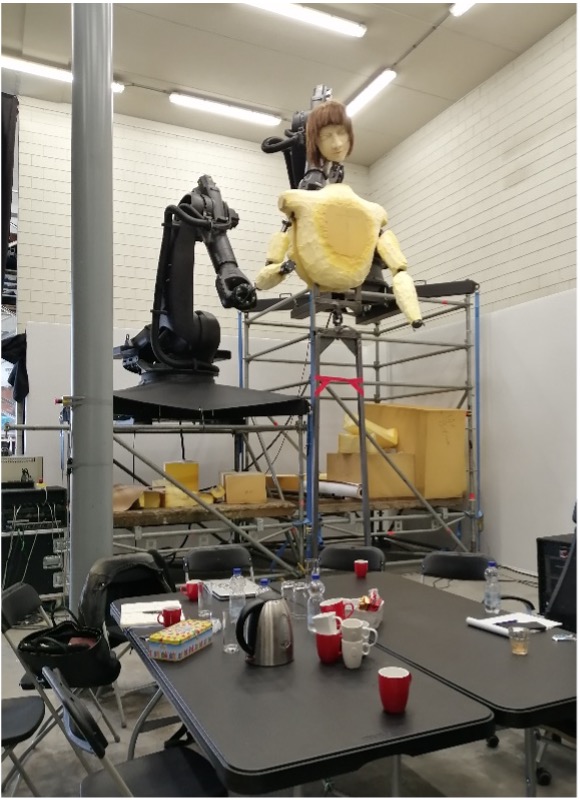 On Thursday the 10th of February the sixth sprint of the collaborative project between Bram Ellens and the Ulrike Quade Company for Floriade 2022, which is part of the Acting Like a Robot research project, took place in Almere. The session started with the invitation to the attendees to watch the outcome of a few weeks of working on the performance installation that will be placed at the entrance and exit of the Floriade. This installation consists of the four and a half meter tall rod puppet Alex, which is at two points connected to and animated by two black KUKA hydraulic robot arms. The robotic arms currently let the puppet perform five blocks of movement and this was the first time all five blocks of movement were shown together to an audience.

Afterwards, the fist impressions of the attendees when seeing the installation and it’s full set of movements for the first time were shared in a round table discussion. A thought shared by most of the attendees was the impression that although the puppet is relatively large, a very intimate atmosphere was surrounding it, somewhat similar to a child acknowledging your presence while playing. Interestingly enough, one of the other common thoughts was that the installation seemed to evoke a holy atmosphere with higher beings trying to communicate with the audience. It varied between comments if this was to be understood as the puppet trying to communicate, or that it seemed like the puppet was used as a tool by the KUKA arms to communicate. Building on these impressions, interesting questions about the collaboration between puppetry and robotics were raised during the session. For example if using robotic arms to animate a puppet causes the puppet to be experienced as alive by the audience, or actually the arms themselves.

The second part of the session was devoted to a reading club in which the article “Programming Play: Puppets, Robots, and Engineering” by Elizabeth Jochum and Todd Murphey was discussed.[1] This text raises the question of how puppetry can be used as a technique to explore new ways of automated movement. According to Jochum, techniques used in puppetry might benefit the production of automated movement, which is often based on ultrarealistic mechanical reproduction, resulting in a somewhat uncanny experience. Instead, the indicating qualities of marionet movement help evoke the binocular vision, or the ability that “allows theatre audiences to grant fictive life to characters or objects based on their behaviors and the performance setting, encouraging spectators to project psychology and emotions onto human actors or inanimate objects.”[2] The text evoked a discussion in the group on how this research could be helpful in other fields as well, how we perhaps had never had thought that engineering problems can be puppetry problems and how we might overcome the limitations we have made in or mind by collaborations between different fields like engineering and puppetry.

Among the attendees of this session were Bram Ellens (multidisciplinary artist), Ulrike Quade (director of the Ulrike Quade Company), Maaike Bleeker (Full Professor at Utrecht University and PI of the Acting like a Robot Project), Irene Alcubilla Troughton (PhD candidate in the Acting like a Robot Project), Ruowen Xu (PhD candidate in the Unbecoming Robot and the Theatrics of Brokenness), Suze van Miltenburg (assistant director in the Floriade Project from the Ulrike Quade Company), Rick van Dugteren (CEO Event Robotics), Elizabeth Jochum (Associate Professor at Aalborg University) and Marit Adriaanse (research assistant in the Acting Like a Robot Project).