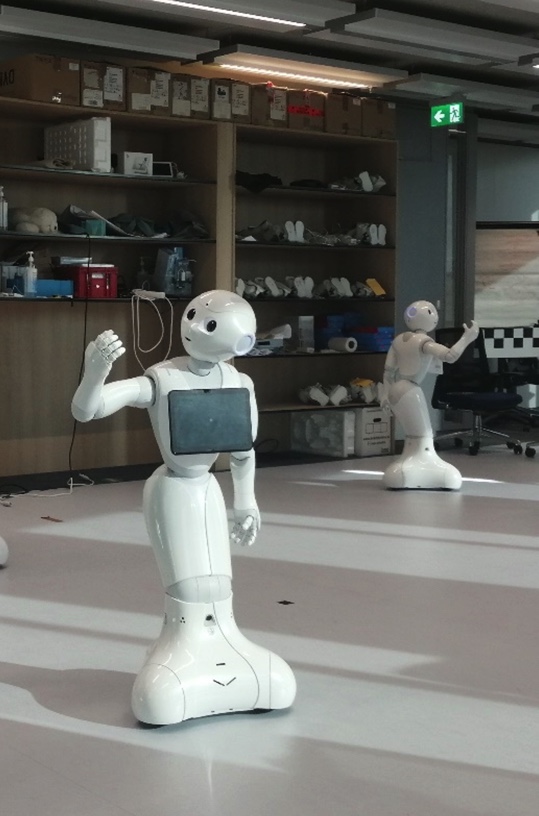 On Friday the 11th of February, the second workshop on rule based robot improvisation of the Acting Like a Robot Research Project took place. The workshops are meant as a place for the exploration of rule-based improvisation techniques as a means for the development of Human-Robot Interaction. This workshop consisted of a session of four rule-based blocks of improvisation with two dancers, a puppeteer and three Pepper robots. The system used to control the robots was a puppeteering one, where one Pepper (the puppet) was controlled kinaesthetically by a professional puppeteer, and another Pepper (the puppeteered) reproduced the movements. In some experiments during the session, the puppet Pepper even controlled two other Peppers. This system helped in exploring HRI without the need to program anything in advance. However, it is the intention of these workshops to eventually create an algorithm that would allow the robot to respond and engage with the human without human control.

After the introduction to the workshop structure and a short warmup, the session started with the first block of rule-based interactions between the dancers and one puppeteered Pepper, which was focused on turn-taking. The dancers were encouraged to focus on playfulness, rather than artistry, using mostly core movements, gazing and hand gestures. In the second block, the participants took on leader-follower dynamics, engaging in interactions in which one of them proposed an action, while the other could make the choice to accept it, reject it or accept it with a condition. This resulted in shifting power relations between the dancers and Pepper, for example when a dancer extended their hand and Pepper ‘refused’ to look at it and vice versa. Afterwards, and even though they were scheduled to be separate, the rules of block three and four were combined. In this phase the puppet Pepper was connected to two puppeteered Peppers which interacted simultaneously with two dancers. The participants were instructed to interact  in four different ways, based on the principles of confluence, divergence, contrast and influence. Meanwhile the audience could interfere by saying ‘change’, after which the participants needed to decide what to change in their movements and how. Overall, the four blocks explored various systems of distributed choice-making, decentralised control and different ways of engagement in an open-ended, playful environment. In between the sessions and after the workshop, several feedback and reflection moments were held.

During this session, various interesting insights on HRI were raised. For example, in comparison to the first workshop in November 2021, this workshop offered the possibility to develop a movement language between the dancers and Pepper that was much more relational, because  the framework of this session was based on tools for rule-based improvisation that focused on the relationships and roles among participants, rather than on motion generation, as it was the case with the first workshop. Moreover, because of the introduction of the puppeteer, this time the dancers could focus on the relationality in the interaction with Pepper, instead of having to control it too. Furthermore, the possibility in the last block of the workshop to control two Peppers at the same time showed that the meaning of movement does not lie in the individual, predetermined intention imbued by the puppeteer in a gesture, but emerges from interaction between two entities. For example, this was very visible when the puppeteer clearly tried to convey a message in the movement of the puppet Pepper and thus subsequently the puppeteered  Peppers, but was picked up very differently by the two dancers interacting with them, creating very different interactions between both dancers and their robot partner.

Considering possible future workshops, multiple interesting points to include in future research were raised too. For instance, the inclusion of rule-based games which allow for the possibility of touch could be an interesting way to amplify moments of close connection. Thinking about possible ways to further embed the role of the puppeteer, it would also be interesting to explore the positioning of the puppeteer in relation to the dancers. Moreover, the inclusion of different robot interfaces could be a way to deepen the role of the puppeteer too. For example, by including a NAO robot, which can be held more like a traditional puppet, as the remote control robot and exploring how the movement would transfer to the teleoperated Pepper robot. Lastly, during this workshop it was suggested that it could be interesting to let the Pepper robots interact with different types of bodies; older bodies, lesser abled bodies, to explore other possible types of movement and interactions.